Obviously this post will be all about food, as usual, but more specifically it will be about all the food I made my poor mother eat when my parents came to Malaysia. A little back story first for those of you who do not know my mom. My mom eats like 3 things: bread, oatmeal, and cheezits. Maybe there are a few more things like Twizzlers, but this might be all I have ever seen her eat in the last 15 years. She is not what you would call an adventurous eater at all. Usually if something has a little dash of salt in it, she will find it too spicy and not eat it. My father, well, he is normal. When he went to Japan some 20 years ago, he told his host not to tell him what he was eating until he was done with it. Good idea! Point it, when my parents decided to come to Malaysia to visit, I was not worried about my father eating the food. But I had to think long and hard about how I was going to make sure Sandy Heise did not die from starvation (or from eating only McDonald’s) Another antidote to this; my parents went to Thailand for a conference a few years ago and DID NOT EAT ANY THAI FOOD. Now my father, he was busy and it could be that I am mis-remembering this and he did eat Thai food. It was a Rotary conference and he was in and out of sessions and meetings all day long. Not saying it’s the best excuse, but it’s an excuse. My mother, she ate pizza I think the whole time.

All this being said, you have already read the title of this special edition of HTLWIM: Sandy Heise is a travel all star. John Heise is too, but I knew he would be. Sandy Heise tried EVERYTHING! So I present to you a collection of foods I made my parents eat in Malaysia and Singapore, in no particular order. Please note, the stuff we ate in Vietnam will be part of the next edition of HTLWIM. And as is the rule for all these food posts, this is in no way comprehensive, this is just the stuff I remember to take pictures of. I was filming video for a lot of my adventures with my parents because I have my sights set on making a nice little video of their trip. This means I have no photos of them trying Durian, but I do have a video I might just have to share later in this post. 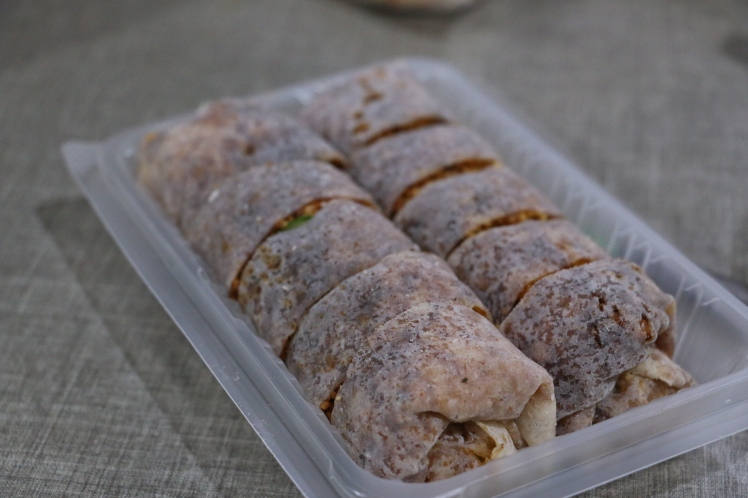 First up is one of my favorite foods from one of my favorite or at least most uniquely Malaysian places, IMBI market. It is just a full blown giant Chinese coffee house or kopitiam. We got there a bit late, on account of being pulled over by the police for driving while being orang putih, or white. Seriously. He said I could not drive on my American license in Malaysia (His government’s website says differently) and it was clear to us afterwards that he was waiting for a bribe, kept standing there saying nothing. So not everything was open, but the popiah stand was still going strong! I almost got arrested again because I left without paying. We ordered kaya toast and Hainanese coffee from one stall. The guy brought the coffee and I saw my dad pay. I thought he paid for everything, turns out he just paid for the coffee. The poor lady had to run and stop me before I left. A bit embarrassing! 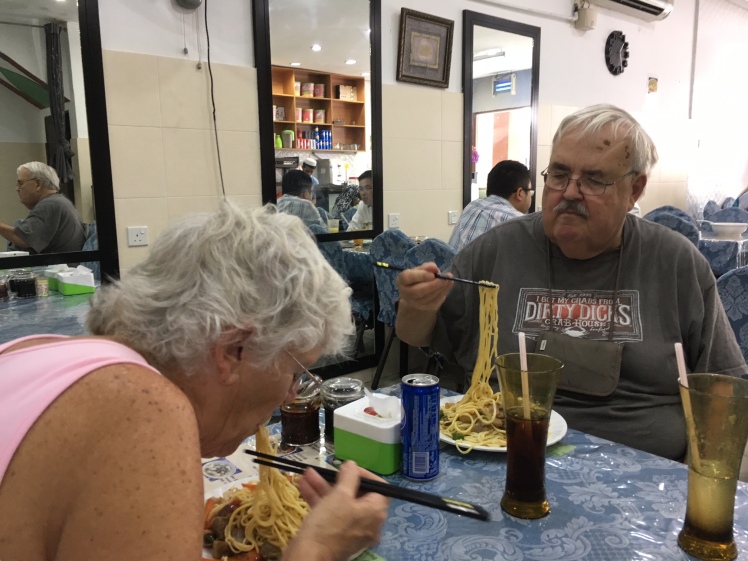 Another one of my favorites…oh who am I kidding, of course they are all my favorites!?!?! Why would I take my parents someplace to eat here in Malaysia that was not something I loved? This is of course mee tarik. I am sure you cannot find Chinese Muslim pulled noodles in Holley NY! I don’t think you can find Chinese people or Muslims there! (Wait we do have a Chinese restaurant there now. A town of 2,000 people but they got a Chinese restaurant!) My mother says this was her favorite food the whole time and I can’t argue against it: The noodles are always great. 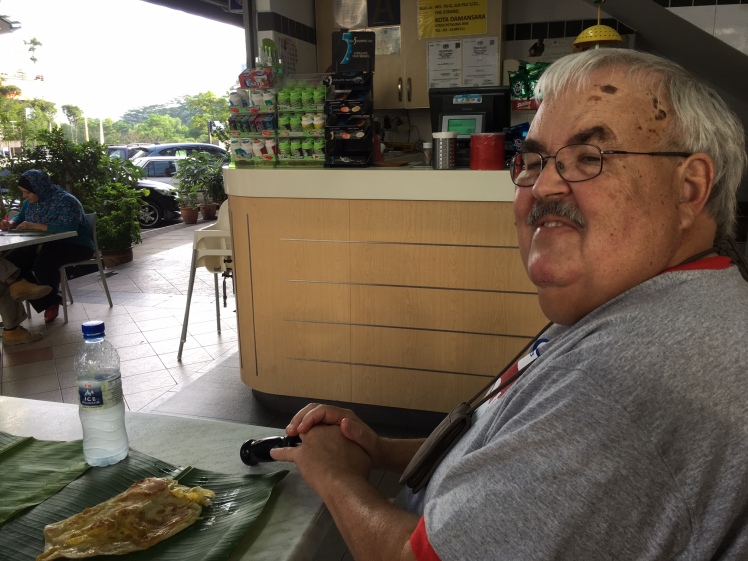 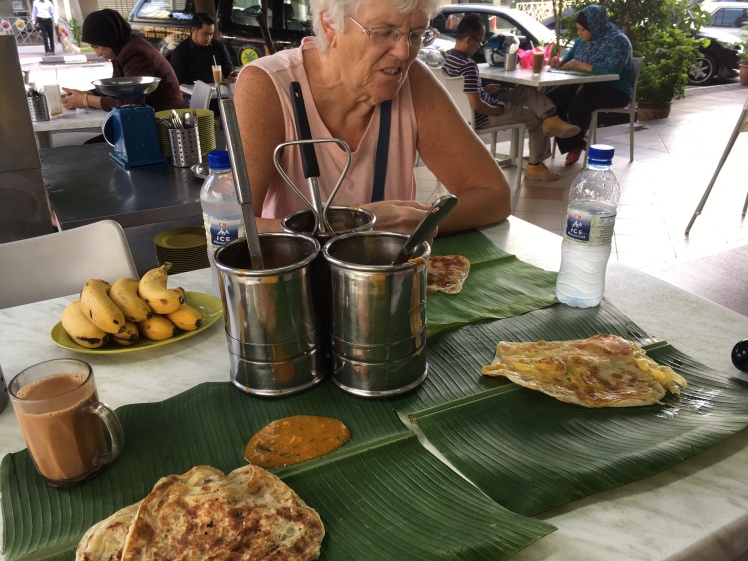 Roti Canai! Now I think my parents tried this when they went to the one Malaysian restaurant in Rochester, NY before coming out here. Obviously it is better here, more authentic here, and for sure you cannot get it on a banana leaf in NY! We got all the classic: roti canai, roti kaya, roti keju, and roti pisang! (plain, coconut jam, cheese, banana-in case you do not understand Bahasa Malaysia!)

So this is a banana meal I had, not my parents, but my dad did have some truly authentic and real north Indian Biryani rice that I did not take a picture of, but it looked like this only hotter and more biryani like!

Lastly, the only photos I took of eating in Singapore. 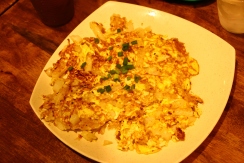 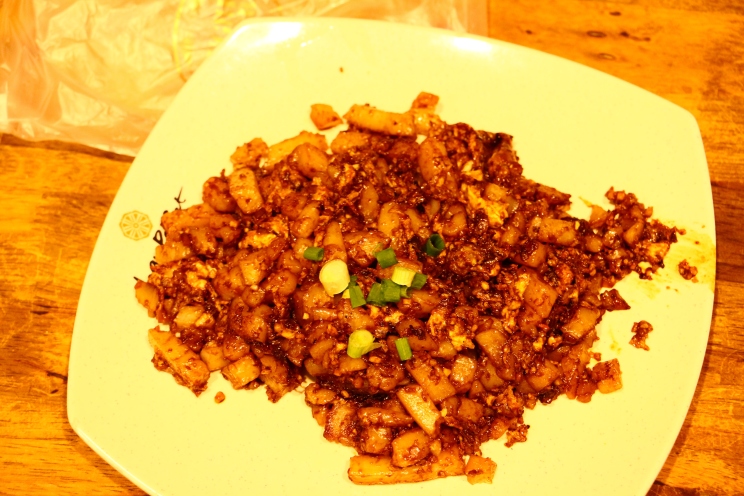 Of course we went to a few Hawker stall centers but I only remember to take photos at the first one! Of course we got my favorite Singaporean breakfast: fried carrot cake! It is not really carrots, it is just what they call white radishes in this part of the world. The “white” version is done with eggs and is good. The “black” version is done with soy sauce and is amazing!

Well, that is it. Since my mother will be reading this and maybe sharing it with her friends let me say again: she ate everything. I had a list of about 24 foods I thought my parents should try and they both ate 22 of them. The last two we just did not have time to eat and were not that important. They both even tried….Durian! (Sorry mom and dad, you knew I would post this)

For the record, she spit it out, she did not throw up. And all their complaints and notes about it are fair but that being said: Saya cinta durian!!!

Okay, that is all for now. Phew, so much to get through still in this blog but that is what happens when you visit four countries in one month! Next up, Taiwan!