Kevin wrote a great post about the orangutans, but we did even more while we were in Kuching! Unfortunately Kevin had to work, so it was just Dad, Shirley  and me for the first two days in the ‘cat city’. I don’t know if Kevin already said this, but Kuching means cat in Malay, and Kuching has leaned into that for sure. Lots of cats, cat statues, and cat souvenirs.

Kuching is a lovely small city on river, with a lovely riverfront walk. Our first day there we got settled in and walked around a bit before our big hike in Bako National Park the second day.

We set out early the next morning for Bako National Park. It’s a large National Park on the coast a 30 minute or so drive from the town. One of the big attractions are the probiscious monkeys. There are very few places to see them in the wild, and this is one of them. You drive to a dock, and then you have to take a boat to the park. Since the tide was low when we got there, we were told to take out our shoes and hop out. It was an unexpected start to an unexpected trip. 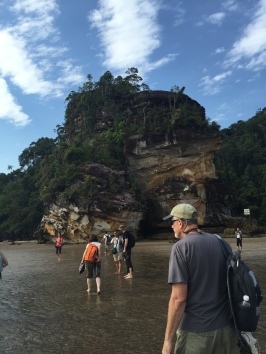 Above: The boat ride, the beautiful beach we arrived on, putting our shoes back on, wild bearded pig on the beach.

After checking in at the visitor’s center we headed out on the easiest trail. After walking for 30 minutes just to get to the trail, we realized we might have been over our heads. It didn’t help that every trail guide we passed asked us how much water we had and reminded us to be careful because someone died in the park last week. Great. Just great.

Above: Monkeys on the trail, after a long, long, grueling walk to the beach, we made it!

We saw a few macaque monkeys along the trail, including a baby! So cute! I also saw a probiscious monkey on the trail. We weren’t sure we were going to make it, but when I got out to the beach I found out there were boats that would take us out to the famous rock formations just off the coast, the ‘seastacks’ and then take us back to the visitor’s center. Whew, thank goodness. 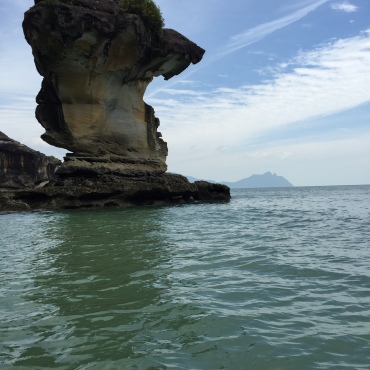 Above: The isolated beach, it was worth the walk, Wild animals attack sign, and the famous seastacks

It was an exhausting day, and oddly enough, most of the wildlife we saw was near the visitor center. But it was beautiful, and seeing these guys sleeping in the trees was amazing.

One thought on “The Cat City!”