As my wife Shirley and I spent three weeks in and around Malaysia in August, I thought I would write about some of my observations that reflect differences from our “western” way of life.

First, about food/eating out. Most people I saw, while eating in public, rarely use a knife. Instead, they use a spoon and fork. The fork is used to push the food onto the spoon. If you have meat to cut, they hold the meat with the fork and cut, i.e. pull the meat off the bone, with the spoon. Chopsticks are usually available but not commonly used, from what I saw. Also, napkins are not usually available and, if they are, they are tissue quality in a tissue-type dispenser. It was good to experience new (for me) dishes and the venues in which it was served. I probably would not have been as adventurous in eating had I not been with my daughter, Iris, or son-in-law, Kevin, suggesting places to eat and foods to try, durian fruit being a prime example which I found to be pretty good. Hawkers, which are essentially food courts, street vendors, and outdoor food markets were our usual eating places. But, yes, restaurants with servers were aplenty. Maybe it’s my age but I think I was glad to get back to American food. Because, even Asian food in America is not Asian Asian food. Tipping is usually not expected. It is a good idea to tip at some of the better restaurants but you learn to check the bill first because they often had a service charge to the bill. A tip that amounts to $2-$3 is considered adequate.

Bathrooms – This issue was particularly annoying to my wife. Toilet paper is scarce in public restrooms. Most public restrooms have squat toilets, some only that type. Especially tough for western women. Also bathroom floors are very wet, especially in women’s. That’s probably because of the cleansing hose that is in the squat toilet stalls. She learned to keep a small roll of toilet paper in her purse.

Traffic – In Kuala Lumpur, drivers stay very close to the car in front of them, compared to US norm, even on highways. The lanes are not always marked well so, at points where multiple lanes merge, it’s like a herd of cattle being driven into one corral. But, from my observation, there is a mutual understanding that it’s okay to squeeze in between two cars that are almost bumper to bumper. Also, as I believe it is in just about all countries other than the US, and maybe Canada, there are many motorbikes among the traffic and they have road rules of their own (most not legal). This was especially the case in Bali, Indonesia. I think all locals get around by motorbike. Other vehicles on the road are pretty much taxis and vans/buses. Most streets are narrow with no shoulder. So when vehicles stop to drop off, pick up, or unload, you just grit your teeth to see if your driver is just going to wiz around them or actually stop to make sure it’s clear. Singapore not anywhere as bad because mass transit train system is very extensive. Also, drivers actually yield to pedestrians there. We used taxis more in the 3 weeks we were there than I have in the last 10 years in the US. Iris doesn’t drive and Kevin was working a lot of the time we were going places in KL. You can get to most places you need to in KL for what amounts to $5.00. The new malls rival most any upscale mall in the US. I observed high-fashion brand name stores in several malls we went in. The one near Petronas Towers has 7 or 8 floors and Kevin said that was not the biggest.

Hotel rooms and apartment we stayed in – Considering we spent three weeks in a tropical climate, we saw no bugs in any of the hotel rooms or the apartment we stayed in. Granted, we were not on the first floor in any of the places we stayed but, also were not in “upscale” hotels, except for maybe Bali. Come to think of it, there were no ground room floors available in any of the places we stayed. Maybe that’s how they keep them out. Most rooms did not have wash rags. Guess they want you to get the “full experience” of using the body wash they provide. In the rooms which we stayed, AC units were internal, usually mounted near the ceiling away from windows. They have a remote that controls the temperature. In the apartment, we were requested to turn them off when gone for the day. In hotel rooms, your room key fits in a receptacle just inside the door. The key completes the electrical circuit for the whole room. So when you leave, nothing stays on. But, in all cases, the AC cooled the room down very quickly once we returned. Also all rooms had a switch for the hot water. It took about five minutes to get the water hot. These seem to be very good energy saving practices but I’m sure a cost savings for the proprietors is part of the motivation for this practice.

People – I did not encounter any hostile situations and people were always friendly. Maybe it had something to do that we were the minority in whatever group we were within. Many people asked us if we liked Obama because they seem to love him. They were also curious if we liked Trump and smiled when we went thumbs down to his name. And, while there is certainly crime in Malaysia, but less so in Singapore, gun ownership is not an issue. Iris says she knows no one there that owns a gun.

One last observation – A glaring observation in Bali was stray dogs everywhere we went. I’m not completely sure if most are feral or just people let their dogs roam the streets. Our tour guide said people love dogs there, they just don’t own them. Also many stray dogs in KL but nowhere as many as in Bali. So with that situation going on, I didn’t see many cats. Except in Kuching, on the island of Borneo, because it is known as the “Cat City”. 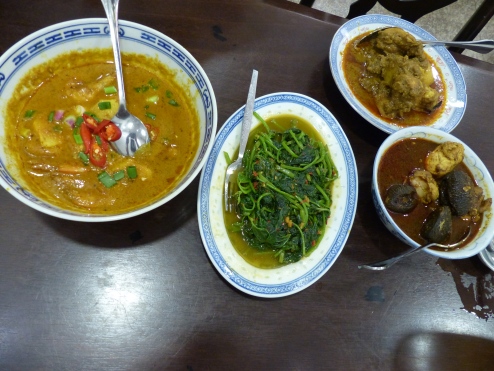