Once again, I am way behind on posting here. To be fair, the delay was in a small part not my fault. We have had some issues with wordpress, in that they have a limit on the total size of the photos you can post, and we have run up to that limit already. So for the moment, if you look back at some older posts, some of the pictures might be missing. Sorry about that! We do not want to pay so the only other option would be to make a new account, or find a third party way to post the photos on the blog. We shall see.

But anyway, I wanted to make sure I get this post out there because on Tuesday Iris and I are traveling to India! We are going to a town called something really long, but everyone calls it Trichy. It is in the southern Tamil Nadu state. We are going there for the wedding of a co-worker of Iris’s. It will be a bit different, but not in the ways you probably think. More on that when we come BACK from India. And after India we have a few weeks off and then at the end of the month we are traveling to Myanmar! Very excited about that.

So on to the food! 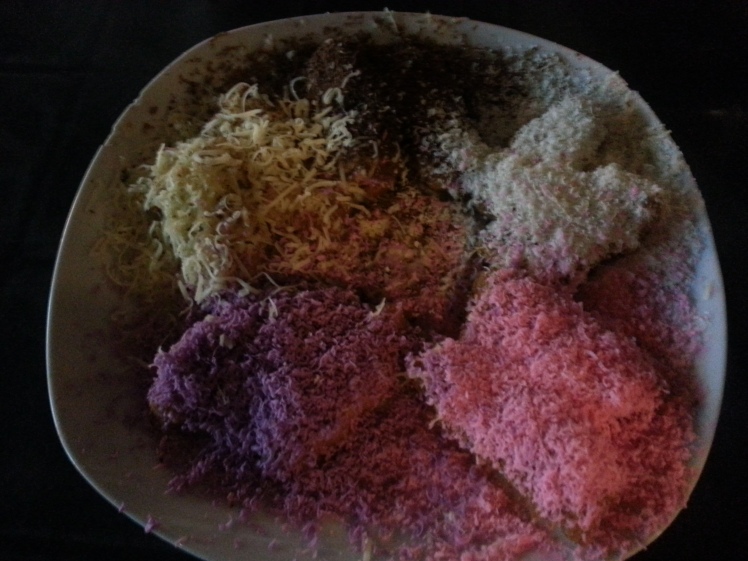 I am going to work through some of the older pictures first, and end up in Melakka since I did not talk about the food in the last post. This is Pisang Goreng! For those learning Bahasa Malay at home, you might remember that goreng is fried, and pisang means banana. It’s fried bananas! Buried under a whole bunch of fun stuff. There was a grape flavor, a strawberry topping, white chocolate, chocolate and cheese! Yummy!

On the left is…something. It had noodles, and beef and veggies and was some kind of Nyonya dish. More on that style of cuisine to come later in the post. On the right was durian cheesecake. As Iris and I are big fans of durian, we were obviously big fans of the durian cheesecake!

Random meal of Nasi Lemak. I guess if we are basing it on how much we eat it, this is our favorite meal. We eat Nasi Lemak once a week. Usually it is from the Thursday night market in Mount Kiara near out apartment. On this day we had decided to go to KLCC to visit the mall for some reason. I think to go to the great book store there so I could be a nerd and buy books to read in India and Burma about, well, India and Burma. (Fiction: I am going with a few R.K. Narayan books for India, and Burmese Days by Orwell for Myanmar I think) While there we decided to try this restaurant we had heard good things about. And it was good…but it was way too expensive for what it was. I think like 30 RM for this dish. We get the same thing, but better, at the night market for about a third of the price every week. 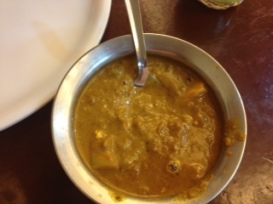 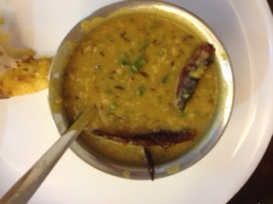 A little bit later we found ourselves in Brickfields, the Little India of KL, to pick up the top to Iris’s sari for the wedding in India. While there we of course decided to get some dinner and in honor of picking up said sari for said wedding in said Southern India, we decided to get Southern Indian food. On the top left is something Iris got. In the middle on the left is the dal dish I got that, while better, is very similar to a fired dal dish I have made before. It was good, and got progressively hotter as you got closer to the bottom of the dish. Of course, gotta have our garlic cheese na’an. And then there is the yellow drink. This is, if I remember correctly, Kesar Badam Milk, which is a hot Indian almond milk. It was pretty tasty, but this culinary adventure I am glad to say was all Iris! 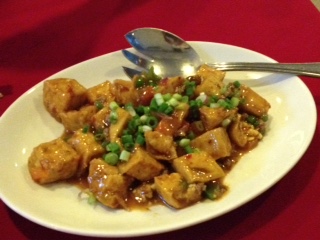 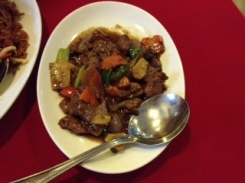 These are a few dishes from a great Chinese restaurant near our apartment. We went there for a Chinese New Year feast that Iris posted about much earlier. We loved it, so we decided to go back again. On the left is Sichuan bean curds. This means it is hot and wonderful. Of course in the bottom left you will see the noodle dish. Gotta have that when going to a Chinese restaurant. Again, I should have either posted about this sooner or taken a picture of what the dish was in the menu, because I have no clue at this point. Top right is a simple beef dish. Again, don’t remember what it was so just enjoy the food porn!

Random Chinese dish thrown in here before we get to the Melakka food. I actually had this last night. It was a curry noodle beef tofu dish. Really tasty broth, with pieces of chicken, beef, and tofu mixed in. We ate at a random noodle house in a random mall because why not? It was really good though. 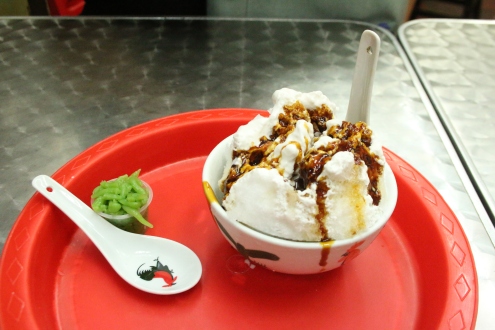 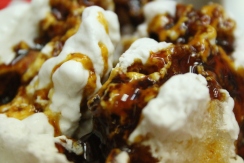 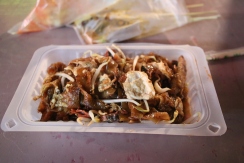 The first night we ate at the Jonker night market, since our hotel was right on that street as you may remember from an earlier blog post. I had Char Kway Teow, which is a very traditional noodle dish in this part of the world. Noodles, soy sauce, sausage, prawns, and a bunch of other ingredients. This one was pretty good, had a rich sweet meaty flavor to it. I did not eat the prawns. Although I have eaten fish since being in Malaysia, the first time in over 25 years, I am not quite ready to be a full blown seafood eater. The other pictures are of chendol. But not just any cendol, one with gula melakka on it. Basically it is palm sugar, but it is something that sets the dish apart when served here. Obviously, it was very good!

The next morning we hit up another  Joann recommended eatery. This place serves one thing: Chicken and rice balls. It is very popular. When we went, it had just opened but was already full. We did manage to get a table right away, the last one in the place. We walked by an hour later and the place was full with a line around the corner. It is a very simple dish. The chicken is dunked in water after it is cooked I believe, which separates the fat from the meat and really adds a nice dimension to the flavor. The rice balls are just that, rice in ball form. It is the glutenous form of rice that is used, which I personally love!

Lastly we have Nancy’s, a place serving traditional Nyonya cooking. When the Chinese first started coming here a long time ago, some of them obviously married local girls. The offspring of this unions became the Nyonya. The food is a mix of traditional Malay and Chinese cooking. It is very good and this restaurant was some of the best food we have had in Malaysia so far.

Well, that is all for now! One more day then off to India!

3 thoughts on “The food is so good I forget to post it! How to Lose Weight in Malaysia Part 17”