Yeah videos, I think I like these. My new thing. A few of these I posted on Facebook already, but in case you did not play them or are not friends with me on Facebook, I’ll put them up here for you all to enjoy. Some of these are new, from the exploration Iris and I went on for Christmas Eve. We decided to head out to Lot 10 Hutong, a great food court in a really small weird little mall. (More on that later on another edition of How to Lose Weight in Malaysia) Afterwards, we headed over to Pavilion. It is one of the bigger and fancier malls in Malaysia. I think every mall says it is one of the bigger ones in KL, or at least that is how Iris and I describe them, but this is one of the fancier ones for sure. It also has a giant Christmas display including a very tall and very expensive tree. I get cut off in the video but you get the point…

So while we were at the small we did a little walking around. Our general plan was to see Star Wars at 3pm so we had a little time to kill. We found a little record store that I just had to wander into because, well…

I think the appeal to me was obvious.

So while we were there we found a great collection of CD’s. 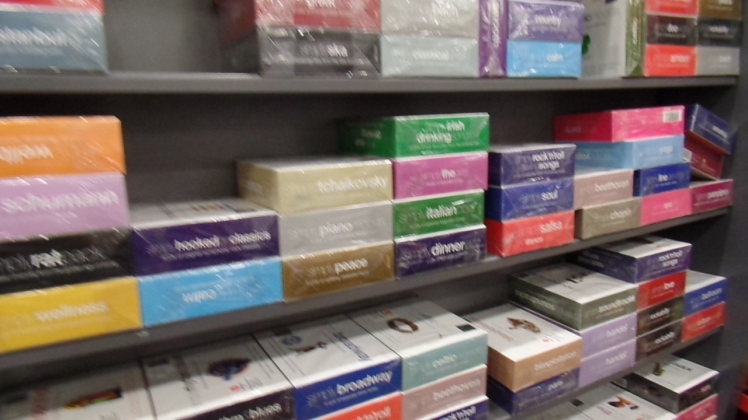 Let’s see what we found….

So yeah, that was a lot of fun.

After the movie we took the monorail to NU Sentral. Before grabbing a taxi we decided to do a little grocery shopping. Upon walking into the mall I remembered that they were having a big month long event for the new Alvin and the Chipmunks movie. When I first heard about this I thought “hmm, I should go and take some pictures for Alexander” who is my nephew for those who don’t know. But after talking to my father, I learned that when he saw it with Alexander, Dr. Giggles came out. That is what we call my dad at movies because, well, he giggles. A lot. To be fair, I am called Dr. Giggles Jr so I am not knocking the nickname at all.  So obviously I was happy to have stumbled into the Chipmunks celebration not for my 7 year old nephew but for my 60 something year old dad. (yes, I do not know my father’s age. I know his birthday though and to defend myself against those who are upset that I do not know his age I give you this: For a few years at Christmas time my family would play Heise Family Trivia. We were all given like $10 in quarters or something like that, and if you got a question wrong you had to put a quarter in the pot. I of course won every year, this is true, but that is not the point. One year, the year my sister’s boyfriend soon to be husband joined us for the first time, one of the questions was “When is Kevin’s birthday?” My dad just started laughing and threw a quarter into the pot. And I do tell that story lovingly. It was pretty funny)

So for those who do not know me on Facebook, I ran the Singapore Marathon a few weeks ago. While there, I took a few videos. And here they are…

Okay, that is all for now!