Don’t tell KL, but I think I’ve got a new crush. Don’t get me wrong, I love where we live, but I couldn’t help but like stepping out on KL for a day to Singapore, and mostly because of it’s airport. Kevin covered most of our day there, but I have a few things to add.But first a few things I haven’t had a chance to post about. I know Kevin generally covers our food adventures, but the Foodie in me gets so excited when I see something like this:

Sorry, did I say Foodie? I meant fattie. Also, Malaysia’s Independence Day was a few weeks ago, and I just have to let you know if you think America has the flag wearing game locked down, you are incorrect:

The air quality here has been a bit terrible as of late, they call it the haze. Mostly it is due to the forest fires they start in Indonesia during the dry season to clear the land for palm oil. This seems to happen every year and it keeps getting worse and worse. The Indonesian government talks a big game…but you know how that goes when it comes to corporations. Anyway, when the API is above 200 we close school. I woke up last Tuesday to find out I had an unexpected haze day! It’s like a snow day but 1,000 times grosser! Anyway, it worked out great because I got to do this:

Also, my mom sent me a text last week asking me if I’d been to Peter Hoe’s beyond, and could I send pics. I thought, ‘What the hell is she talking about, this makes no sense.’ Then I googled Peter Hoe’s Beyond and found out he’s a super cool and hip interior designer and has a secret, well hidden shop in Chinatown with cool and hip things. My mom knows what’s up. So we found it after a bit of searching, and here are the pictures as promised: 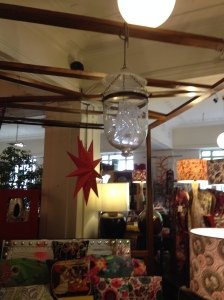 and the best part:

Now, Singapore. Kevin covered most of our trip, but I’m not sure he sang the praises of this airport enough:

That’s right, that’s all in the airport! Oh, and two more I just have to share:

One thought on “Oh Southeast Asia, you so Hazy!”