A few weeks ago when Colette visited Iris recommended that she check out the Lot 10 food court. Lot 10 is a mall, one of many here in Kuala Lumpur. There are many of them here in Malaysia, as readers of this blog certainly know. Malls are different here then they are in the US. We had brunch today at a mall because, well, sometimes the best food is there. The last time Iris and I ate at a mall food court, we spent about $4 dollars for two meals, and we both got cases of food poisoning. When Colette went to the Lot 10 mall, she saw a big old rat. Despite these two things, Iris was still game to check out the Lot 10 food court.

The Lot Ten food court is styled after a Penang food court or a chinese hawker stall really. When they built the mall, they went to some of the more popular food stalls around the city and asked them to open up little restaurants in the food court. Like a lot of the malls, the food courts are not just McDonald’s or S’Barros and places like that. They are better quality, except for the place we got sick obviously. The mall at the bottom of the Petronas Towers has a big food court, and then a smaller one serving local/regional food, all of it pretty good. Of all these places, Lot Ten is supposed to have the best food court.

The mall itself is pretty small and when we went there, there were not a lot of people shopping. There were twice as many people in the food court, which is a good sign for its quality. (If you want to know what restaurants/food carts are the best in a foreign city, go to the ones with the biggest lines)

So there is our trip from the food court. As I said, there are a lot of options but we saw a picture of the steamed buns and instantly decided that is what we wanted. This was a Chinese restaurant obviously. In the lower right hand corner, we have carrot cake. Not like the desert in the States. It was good, kind of tasted like hash browns. (With the note that hash browns in this country come in little cakes, looking similar albeit smaller and thicker than the carrot cakes in this photo)

So I actually don’t really have anything to add to the giant steamed bun discussion other than this picture of what it looks like inside. The pork seemed to include all parts of the animal. Mostly meat as you and I would think of it in America, but every once in a while you would get a little bite of something rubbery and crunchy, tasting a bit like a tendon or something of that ilk. But like I said, this won the meal. Now desert, that was another story…

…and here is that story! One of the big Malaysian deserts is Air Batu Campur, or Ais Kacang which means Ice Beans. You’ll see why in a second. Iris and I had been really interested in trying it as it sounds….well….weird. It usually is made of shaved ice, read beans, sweet corn, grass jelly, and agar agar. So yeah, a bit different. We decided to get two kinds. First, the more traditional kind:

Lots of good stuff. The jelly and agar agar is buried underneath the ice. Now, the other kind:

Yes, Air Batu Campur with durian on top! Obviously it is a bit of a durian sauce but it smelled and tasted like the real thing because it was made with the real thing. It was good. Really good. Both of them were, once you get over the fact that corn is a desert here and the agar agar/jelly stuff. Agar agar by the way is a jelly like substance obtained from algae. It’s not bad, just a bit odd-looking. But as you will soon see, we got over that and enjoyed our desert! 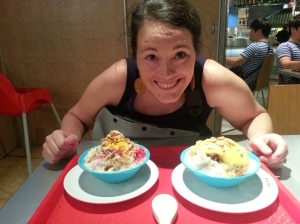 See, we enjoyed it!

Okay, off to enjoy another great meal here in Malaysia: Leftover kimchi pancakes Iris made the other day. I told you we loved them! Oh, and for the record we have actually lost weight here in Malaysia despite or maybe because of this great food. I am down about 15 pounds myself. Good fresh food and oppressively humid weather is doing the trick!

One thought on “Let’s go to the Mall Today!-How to Lose Weight in Malaysia Part 8”