I swear, we ran into the protest by accident. I think my parents in particular will not believe this, but we did not mean to see the protest at all and we did not join it in anyway. I even told Iris to stay away from the area on Saturday just in case things went bad.

So things are….interesting here in Malaysia politically. I will leave you to read up on it your own, but in short the PM has been accused of stealing a whole lot of money. Also, everyone has freedom here but the Malays are a protected class in the constitution. Islam is the national religion, but everyone is free to practice any religion they want. Chinese make up 43% of the population, but representation in the parliament is drawn up so that Malays are more represented than anyone else.

So point being, some people are not happy about all of this. The big protest group is called Bersih, which means clean. They have staged three big protests in the last few years. They decided to have another parade/rally this year due to the allegations about the stolen money. The government said that they missed the deadlines for the permit to have the rally, so it was illegal. But the organizers of the rally decide to go ahead with it anyway. They decided to hold it at Merdeka Square, which is Freedom Square. It was where they first raised the Malaysian flag 58 years ago today, when Malaysia first became a country. Obviously this upset the government, as they have been having rehearsals for the big parade the last few days.

Our first stop of the day, after I got out of work, was Kampung Baru. Supposedly this area has a nice little night market near the train station. Well, we did not find it so nice. There was a little market near the station that had some good food and a few people selling clothes. But overall, it was nothing to right home about.

We did some exploring in the neighborhood and found the real market a few blocks away. Kampung Baru is a Malay neighborhood where most of the houses are wooden and old. There is a central community area with a stage and a lot of seafood restaurants on the main street. All in all, a dub of a trip.

So we decided to just go home. There are no trains that go to our neighborhood, so we usually go to Sentral or Masjid Jamek and catch a cab home. Sentral is annoying. They make you get a coupon and wait in line for a taxi, and they over charge. Masjid is where I usually get off when I take the train home from work, because you can get right out of the station and grab a taxi no problem. It is near Merdeka Square, but we thought it would be okay.

We were wrong. Very wrong.

It turns out that train station is the one right next to the square. I should have known that, but to be honest when I leave the station I never view the square, so out of sight out of mind. 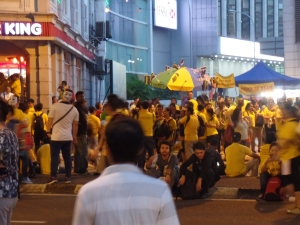 So we did stop and take some photos, but mostly our goal right away was to get out of there. Seemed like it would be easy, but it was a big protest, blocking a lot of streets. Long story short, we had to walk about 1.5 miles or so to get far enough away to be able to get a taxi that could take us home. The area is home to a lot of businesses and a good night market. Most of it was pretty empty once we got away from the protests. Lots of people had the same idea we did, to stay far away from the protest area this night. Most of them were also a lot smarter than us when it came to the geography of the city.

A few more photos and videos with no comment. It is time to make dinner!

Also, a BBC article on the protest: 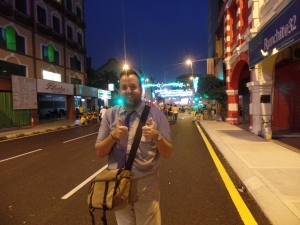 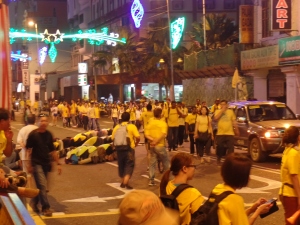 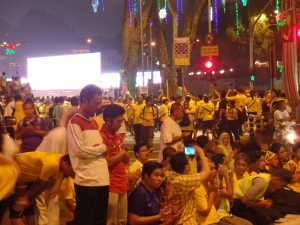 One thought on “That time Iris and I joined an anti government protest by accident-Another weekend adventure!”