Well as many of you know, our Singapore trip didn’t quite go as planned, and mostly consisted of this:

The day had been quite exciting leading up to the trip, Kevin and I accidentally fell off buildings (no injuries):

Then Kevin got to ride a friendly anthropomorphic train:

However after our frustration at the airport, we broke down and had:

However we made the best of it and spent the next day living it up in KL! I’ll let Kevin handle the food side, and I’ll just talk about our fun times in KLCC, the Aquarium, and Chinatown. We decided to hit up the Aquarium after the obligatory walk in KLCC park, as we had yet to actually walk through the park.

Kevin also discovered a very nice jogging track at the park. Hopefully he’ll be able to run there some. Anyway, after the park it was on the the Aquarium. For the most part it was a pretty typical Aquarium: 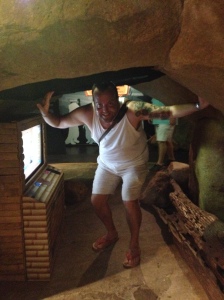 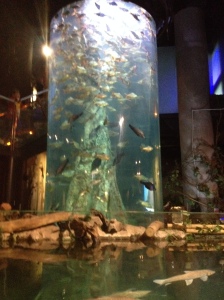 The coolest part was their under water tunnel:

After the Aquarium we headed to a bead shop Kevin discovered in Chinatown. Chinatown is known for its poor quality knock off goods that break easily, it was quite fitting that the sign above Petaling Street looked like this:

Even better, I saw this:

We finished up our day at the Lot 10 Hutong, but I’ll let Kevin handle that.

One thought on “So Much for Singapore…or More KL Fun!”